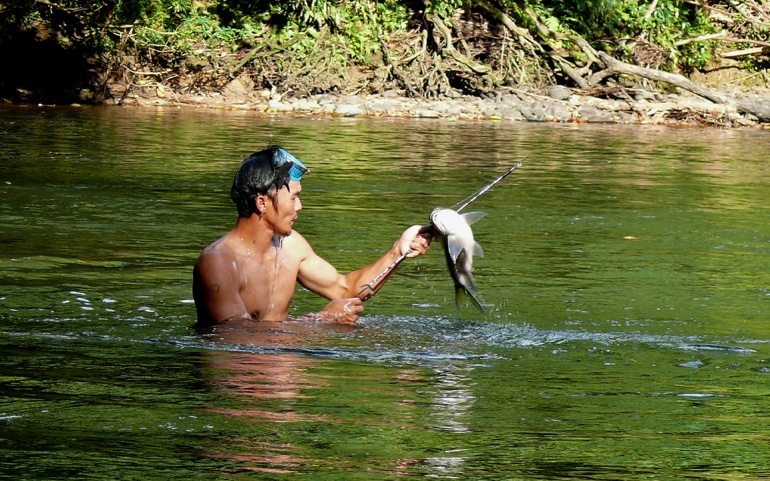 After a series of coal-slurry spills into the Malinau River in Indonesian Borneo, locals and environmental groups are calling for tougher sanctions, and for national banks to divest from the coal industry.

The latest spill in February at a facility operated by PT Kayan Putra Utama Coal (KPUC) in North Kalimantan province killed thousands of fish and forced downstream municipalities to cut off their water supplies.

The government of Malinau district in North Kalimantan immediately issued a decree requesting that the company repair embankments, establish a system of inspections, develop a rapid response plan, and replace the dead fish. The company itself apologized, pledging to provide clean water and reseed the river with fish and shrimp larvae.

However, the Mining Advocacy Network (Jatam), a watchdog group, says these steps are not enough to exact reform.

“This is not a sanction but a recommendation,” said Andri Usman of Jatam.

KPUC was in 2017 required to shut down its operations for 60 days following a similar spill by another miner in the same region. That company, along with KPUC and two others, subsequently signed an agreement that if another spill occurred, their mining licenses would be revoked.

“The 2017 sanctions are heavier than now, while the current impact is more severe than the 2017 case,” Usman said.

Jatam suggested the light penalty is linked to the fact that one of KPUC’s owners is a prominent businessman who backed the election of the current deputy governor of North Kalimantan, Yansen Tipa Padan. Prior to being elected, Yansen was the Malinau district head when the current mining permits were initially approved. The previous deputy governor, Udin Hianggio, is a part owner of two other coal companies, including PT Baradinamika Muda Sukses (BMS), which was responsible for the 2017 slurry spill. The fourth company cited in that incident is owned by the son of the former Malinau district chief, Marthin Billa.

Muhammad Jamil from Jatam’s national office points to several laws on the books that could be cited to impose penalties on KPUC, including the suspension or revocation of permits, or bringing criminal charges for environmental destruction.

“Neither the district environmental agency nor the water board will talk about these impacts,” Jamil said. “But this isn’t just about the waterway, but also the local community around the Malinau River. This is destroying livelihoods that depend on the river.”

According to Jamil, local police have several legal channels for pursuing real punishment for KPUC, including going after the company on the basis of the 2017 agreement that it signed.

“The problem is whether they want to or not. That’s what we’re waiting for. The path is clear, it’s just a matter of commitment,” Jamil said.

Ahmad Ashov from Bersihkan Indonesia is also working to end the trend of corporate environmental crimes going unpunished. He said the best way to prevent issues arising from the coal industry — which range from land disputes, to water pollution, to carbon emissions, to even higher susceptibility to COVID-19 — is to shut it down entirely.

“Let [the coal] remain in the ground,” Ashov said. “Because we already know the impact.”

Outside Indonesia, more than 130 globally significant banks have committed to divesting from coal mining or coal-fired power plants, according to the Institute for Energy Economics and Financial Analysis. However, money still flows into the country, including from China, which invested $9.3 billion into Indonesia’s coal-fired power between 2000 and 2019.

Maftuchan said he’s encouraged by the government’s Financial Services Authority (OKJ) recently publishing Phase II of its sustainable finance roadmap, which encourages financial institutions to apply environmental and social governance to their activities. However, critics say these guidelines are not enough without concrete actions, timelines for divestment, and strict enforcement.

Banner image: A fisherman catches fish in the upper waters of the Malinau river; the river is an important resource for food in the region. Photo by Michael Padmanaba/CIFOR via Flickr.

This story was reported by Mongabay’s Indonesia team and was first published on our Indonesian site on March 5, 2021.